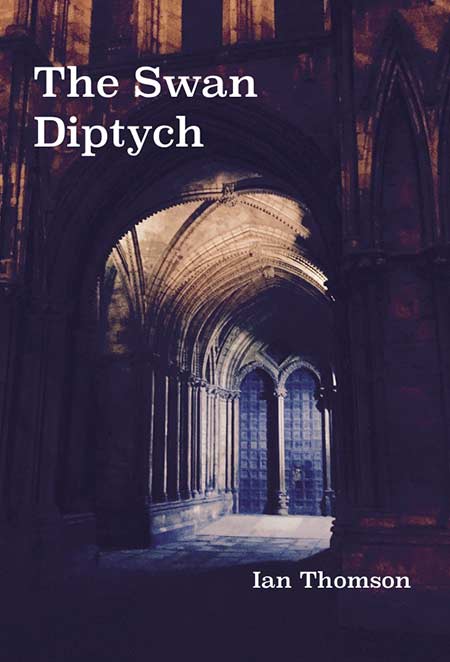 The two stories in The Swan Diptych are likewise hinged, sometimes obviously, sometimes more subtly. Both depict the consequences of the folly and overweening pride of those who are clothed in ‘a little brief authority’.

Diptych: a painting or carving (often an altarpiece) on two panels, hinged like a book.

The two stories in The Swan Diptych are likewise hinged, sometimes obviously, sometimes more subtly. Both depict the consequences of the folly and overweening pride of those who are clothed in ‘a little brief authority’.

In the year 1387, King Richard II visits the thriving cathedral city of Lincoln and presents a ceremonial sword to the Mayor. There is a local legend that if the swans ever leave the pool at the foot of the steep hill where the cathedral stands, the building will fall. During the celebrations the Dean believes himself to be insulted by one of the swans and vows to avenge himself.

How the Dean Angered the Swans is a fable which exposes the arrogance of man and his refusal to recognise his proper place in a world which is in his custody. The Patronal Feast is set in St Stephen’s College, Cambridge, in Tudor times. During the annual feast in honour of the saint’s name, members of the college are permitted to eat roast swan by an edict of Richard II called the King’s Writ, which is read out as the dish is served. Before the night is over, a macabre ritual murder is discovered, the Writ has disappeared, and a kitchen boy has been abducted. Paolo Giovio, internationally renowned scholar, and friend of Erasmus, is sent for. He uncovers a dark train of events, involving men of power and high station. This is a tale of ambition and betrayal over three turbulent decades.

Reviews for The Swan Diptych

The essential difficulty with writing historical fiction is to get all the elements right – the dialogue, the vocabulary, the characterisation, the atmosphere, the historical context and the detail – and Ian Thompson’s Swan Diptych succeeds on all counts. His research seems impeccable to me but as in all the best historical writing is worn lightly. The two stories in this diptych, linked by the central motif of swans, work on many levels. For a start, and perhaps most importantly, they work as a really good read. Historical detective fiction, crime fiction, murder mystery, a little fantasy thrown in for good measure, all these combine to create a really compelling and entertaining tale. There’s wit, black humour and erudition aplenty here. The first short story is set in medieval Lincoln, the second, longer novella in Tudor Cambridge. I believed in both these places. I believed that what happens could indeed have happened. I was kept guessing right to the end and the conclusion in both stories is deeply satisfying. Highly recommended.

Superb. Both stories are excellent and compelling, so much so that I had to read the final couple of chapters at my desk as I couldn’t leave it unfinished on arrival at the office! They are as well researched and written as the historic fiction of well-known authors like Sansom and Scarrow.

I expected this publication to be a pair of novellas of similar length. In fact, we are presented with a literary entrée, followed by the chef’s signature dish. How the Dean Angered the Swans is an historical fantasy, set in Richard II’s Lincoln. We discover how the Cathedral clergy’s conceit leads to the city’s ruin. It is both scholarly and slapstick. I laughed out loud at how the swans effect the Dean’s demise.
The Patronal Feast takes us across the Fens to Cambridge, and through time to the reign of Elizabeth I. It is an altogether richer dish, and whilst there is still a deal of comedy to be found, the mood is much darker. Again, we have a story in which there are few likeable characters, again the author’s scholarship is in evidence, but it is never superfluous. The details about conditions in a C16th Cambridge college kitchen are essential to the unravelling of the mystery. The plot is well-constructed, and the mixture of characters’ letters and an omniscient narrator make for a page-turner of a story.

The two stories of Ian Thomson’s Swan Diptych, one set in Lincoln at the time of Richard II, the other in Cambridge in Tudor times, are, as the title suggests, hinged together in the manner of the two panels of an altarpiece and the links are intriguing.
How the Dean angered the Swans is a wonderful story; brilliantly constructed, beautifully written and entertaining throughout. The magnificent pomposity of the Dean’s sermon to the swans is a joy to read.
Nonetheless this first tale is something of a curtain-raiser to a much more substantial second story, The Patronal Feast. This is a complex murder mystery, the fiction deftly woven into three decades of Tudor history. It’s a rumbustious tale told with enormous relish and there are some quite thrilling twists and turns.
Not many of the characters in these stories are lovable, but they are all immediately recognisable and at the same time larger than life. Throughout both stories power and the vanity which can so easily go with it are relentlessly pilloried.
This is a fascinating and joyous work and thoroughly recommended.