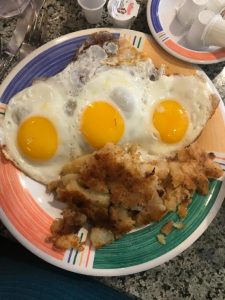 Our last morning was given over to a stroll in Central Park and the weather gods were good to us: it was bright crisp and sunny. Naturally, a visit to the Astro Diner was in order: first, because we liked it so much and, second of all (see, getting very fluent with these Americanisms)!) second of all, because it was on the way. My breakfast was three eggs, sunny side up and corned beef hash, a combination it would never have occurred to me to put together in Blighty. The eggs were lacey and wonderfully sunny, as you can see in the picture and the hash was spicy and very toothsome. Fortified thus we made our way up Sixth Avenue to the Park.

There were lots of horse-drawn carriages waiting at the periphery, each decorated differently, but the price of a tour was preposterous so we gave them a miss, preferring, to walk in any case. For the same reason, we ignored the carriages in Bruges and the gondolas in Venice, which only Chinese tourists seemed able to afford. It was as well we were happy to walk or we would have missed the American robin. Helen explained that he is not related at all to our familiar home-grown robin and you can see that he is larger and a different shape, though he does have a red breast. Helen is a biologist as well as an art lover and bon-viveur. Later, we came across a pretty black squirrel – a mutation according to my expert companion. Both the squirrel and the robin were examples of fauna you would not find in the wild back in England and were a reminder that we were three and a half thousand miles away from home and on a different continent.

Before long the Dakota  came into view on our left. It was in the archway of this building that John Lennon was murdered in December 1980. As with the assassination of Kennedy in 1963, I can remember exactly what I was doing and where I was at the time. In this case, I was polishing glasses behind the bar in the Penwig, in New Quay, West Wales. At first I didn’t believe the waitress who told me. It seemed impossible. So it was weird to see the building in reality. We walked around a lake and up to the memorial where there was a little crowd of tourists of many nationalities paying homage. Though there were signs asking for quiet there was a busker who, ironically, was playing a George Harrison number. Despite that it was quite a moving experience.

It was but a short walk from there to the Shakespeare Memorial Garden which contained every herb mentioned in the plays. Ophelia would have been pleased. I know my rosemary from my oregano but this was far too arcane and exotic for me. I couldn’t see a cuckoo pintle anywhere, though. In the middle of the garden was a viewing platform built like a wooden fort which, in my opinion, seemed more inspired by Disney than Shakespeare. It did offer some splendid vistas, however – back to the Dakota to the west and over a lake to the north.

I was anxious to see the skating rink which we’d glimpsed when we first arrived at the Park. It took us a while to find it. On the way we came across a charming carousel with classic painted horses. All that was missing was a steam calliope. Our search for the skaters was well worth it. The widely spaced little figures reminded me of L.S. Lowrie – or maybe even Brueghel. Then contrast that with the scale of the skyscrapers behind them and the image was very striking and weirdly beautiful.

It was time to head back to the hotel to collect our luggage. A farewell coffee at the Astro, a beer at the hotel, and a couple more at the airport, and then the tedious flight. I won’t bore you with the details. I’ll just say that Dunkirk was perhaps not the best choice of in-flight movie at 37000 feet.

‘New York, New York, the city so nice, they named it twice.’  Thank you NYC. We had a fabulous time and nobody could deny that we packed a tremendous amount into such a short time. It looks as if we made our visit just in time before this hideous pandemic hit the planet. My heart goes out to this unique place and to the vigorous, breezy New Yorkers who make it such a great city. Thinking of you at this grim time and thanking you for making us so welcome. This too shall pass.

This site uses Akismet to reduce spam. Learn how your comment data is processed.